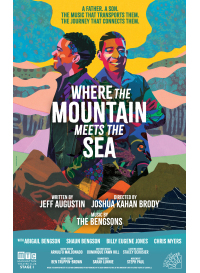 Where the Mountain Meets the Sea

Manhattan Theatre Club (Lynne Meadow, Artistic Director and Barry Grove, Executive Producer) is pleased to present the New York premiere of Where the Mountain Meets the Sea, written by AUDELCO Award nominee Jeff Augustin (The New Englanders, “The Morning Show”) and directed by Princess Grace Award winner Joshua Kahan Brody, with music by The Bengsons (Hundred Days, The Lucky Ones).

The New York premiere production will feature Obie and AUDELCO Award winner Russell G. Jones (Ruined, “Only Murders in the Building”) and Chris Myers (How I Learned to Drive).

From acclaimed writer Jeff Augustin comes a timely story of a son's quest to connect with his father. Lyrical story-telling and live folk songs from The Bengsons weave a tale of searching and longing, family and legacy. A Haitian immigrant travels from Miami to California on a once-in-a-lifetime road trip. Years later, his son makes the same journey in reverse. Along the way, blurring the lines of time, these two finally discover common ground and make a connection that has eluded them for decades. Directing is Princess Grace Award winner Joshua Kahan Brody.

Where the Mountain Meets the Sea was commissioned by and premiered in the 2020 Humana Festival of New American Plays at Actors Theatre of Louisville.