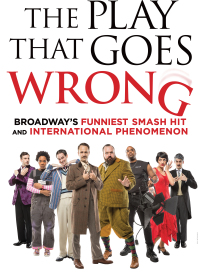 The Play That Goes Wrong

Co-written by Mischief Theatre company members Henry Lewis, Jonathan Sayer and Henry Shields, The Play That Goes Wrong is a riotous comedy about the theatre. The play introduces The ‘Cornley Polytechnic Drama Society’ who are attempting to put on a 1920s’ murder mystery, but as the title suggests, everything that can go wrong…does, as the accident prone thespians battle on against all the odds to get to their final curtain call.

After 27 previews and 745 performances the Mischief Theatre production played its final Broadway performance on Sunday, January 6, 2019, making it the 2nd longest running show in the history of the Lyceum Theatre (after the original Born Yesterday in 1947).