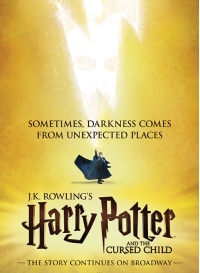 Harry Potter and the Cursed Child

Based on an original new story by J.K. Rowling, Jack Thorne and John Tiffany, Harry Potter and the Cursed Child is a play by Jack Thorne, directed by John Tiffany.

“Harry Potter and the Cursed Child is one of the most defining pop culture events of the decade” (Forbes).

Adventure runs in the family. When Harry Potter’s head-strong son Albus befriends the son of his fiercest rival, Draco Malfoy, it sparks an unbelievable new journey for them all—with the power to change the past and future forever. Prepare for a mind-blowing race through time, spectacular spells, and an epic battle, all brought to life with the most astonishing theatrical magic ever seen on stage. “You’ll be wondering ‘how’d they do that?’ for days to come” (People Magazine).

Experience the wizarding world like never before from the moment you arrive. The entire theatre has been transformed with hidden surprises to discover around every corner. “It’s a marvel of imagination, as magical as any spell or potion” (The New York Times).