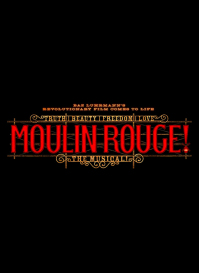 Moulin Rouge! The Musical is the winner of ten 2021 Tony Awards including Best Musical, the Drama League Award for Outstanding Production of a Musical and it received ten Outer Critics Circle Award Honor citations, including New Broadway Musical.

Moulin Rouge! The Musical opened to critical acclaim at the Al Hirschfeld Theatre in the Summer of 2019 and recently re-opened following the shutdown of Broadway due to the pandemic.

Enter a world of splendor and romance, of eye-popping excess, of glitz, grandeur and glory! A world where Bohemians and aristocrats rub elbows and revel in electrifying enchantment. Pop the champagne and prepare for the spectacular spectacular...Welcome to Moulin Rouge! The Musical.

As in the film, Moulin Rouge! The Musical celebrates over 160 years of music – from Offenbach to Lady Gaga. The stage musical features many of the iconic songs from the movie and also includes recent hits released since the movie premiered 20 years ago.

Moulin Rouge! The Musical is produced by Carmen Pavlovic and Gerry Ryan OAM for Global Creatures and Bill Damaschke. General management is by Foresight Theatrical.

Released by 20th Century Fox, Baz Luhrmann’s MOULIN ROUGE! premiered at the 2001 Cannes Film Festival. At the 74th Academy Awards, the film was nominated for eight Oscars, including Best Picture, and won two.