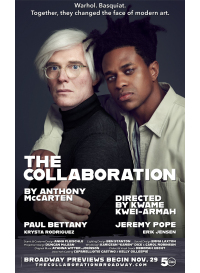 Warhol. Basquiat. Electric, eccentric, polar opposites... together, for the first time in the most unlikely partnership the art world has ever seen. Paul Bettany (The Avengers, "WandaVision," “A Very British Scandal”) and Jeremy Pope (Choir Boy, Ain’t Too Proud, “Hollywood”) star in the thrilling American premiere of the London sensation.

In the summer of 1984, longtime international superstar Andy Warhol and the art scene’s newest wunderkind, Jean-Michel Basquiat, agree to work together on what may be the most talked about exhibition in the history of modern art. But can these two creative giants co-exist, or even thrive? The stage is their canvas in this sizzling tour-de-force by Anthony McCarten (four-time Oscar®-nominated writer of The Two Popes and Bohemian Rhapsody), directed by the acclaimed Kwame Kwei-Armah (Artistic Director of London's Young Vic).

The world premiere of The Collaboration was originally produced by the Young Vic Theatre London in January-March 2022 in partnership with Eleanor Lloyd, Anthology Theatre, Stanley Buchthal and Eilene Davidson in association with Denis O’Sullivan.