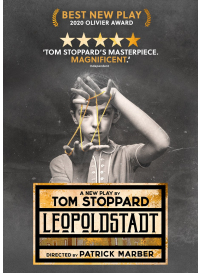 Perhaps the most personal play of Stoppard’s unmatched career, Leopoldstadt opened in London’s West End to rave critical acclaim on January 25, 2020. A planned extension due to overwhelming demand was curtailed due to the COVID-19 lockdown seven weeks later. In late 2021, the play returned for a further 12-week engagement. Both runs completely sold out and Leopoldstadt received the Olivier Award for Best New Play in October 2020.

Leopoldstadt marks Tom Stoppard’s 19th play on Broadway since his groundbreaking Rosencrantz and Guildenstern are Dead opened 55 years ago. Stoppard has won four Best Play Tony Awards, more than any other playwright in history.

Set in Vienna, Leopoldstadt takes its title from the Jewish quarter. This passionate drama of love and endurance begins in the last days of 1899 and follows one extended family deep into the heart of the 20th Century. Full of his customary wit and beauty, Tom Stoppard’s late work spans fifty years of time over two hours. “Tom Stoppard is endlessly intrigued by questions of fate, chance, coincidence, in history as well as in love, and in the epic, breathtaking Leopoldstadt, he examines the consequence of an entire people trapped in a common fate” (The Washington Post). With a cast of 38 actors and direction by Patrick Marber, Leopoldstadt is now playing on Broadway. This is a play that ‘demands to be seen’ (The Daily Beast).

Leopoldstadt is the sixth collaboration between Sonia Friedman Productions and Tom Stoppard, which reunites Stoppard, Marber, and Friedman.