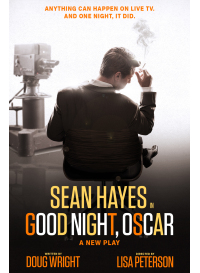 In Good Night, Oscar, Sean Hayes plays Oscar Levant: Hollywood actor, concert pianist, and the most subversive wit ever to appear on television during its Golden Age.

It’s 1958 and Jack Paar is hosting “The Tonight Show.” He’s booked his favorite guest, a pundit as hilarious as he is unpredictable: Oscar Levant, who once famously proclaimed, “There’s a fine line between genius and insanity, and I have erased that line.”  In 90 short minutes, Oscar will have audiences howling, censors scrambling, and - when it’s all over - America will be just a little less innocent than she was before.