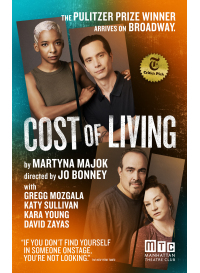 The cast will feature original stars Gregg Mozgala (Lucille Lortel Award winner for his performance) and Katy Sullivan (Theatre World Award winner for her performance), who reunite for the Broadway production, and will be joined by Tony Award nominee Kara Young (Clyde’s, The New Englanders at MTC) and David Zayas (“Dexter,” Anna in the Tropics).

Winner of the 2018 Pulitzer Prize, Martyna Majok's powerhouse play receives its Broadway premiere after a celebrated run at MTC's Stage I. Hailed by The New York Times as "gripping, immensely haunting and exquisitely attuned," this insightful, intriguing work is about the forces that bring people together, the complexity of caring and being cared for, and the ways we all need each other in this world. Directing is Obie Award winner Jo Bonney.