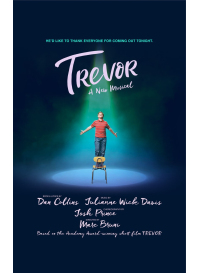 Producers Roy Furman and A.B. &W. Productions have announced the New York debut of Trevor: The Musical to open in April 2020 at Stage 42 (442 West 42nd Street).

Trevor: The Musical features book and lyrics by Dan Collins (Southern Comfort) and music by Julianne Wick Davis (Southern Comfort). Trevor: The Musical is based on an original story by James Lecesne and the Academy Award-winning short film Trevor, directed by Peggy Rajski and produced by Randy Stone, that had an original screenplay by James Lecesne. Choreography is by Josh Prince (Beautiful: The Carole King Musical) and direction is by Marc Bruni (Beautiful: The Carol King Musical).

Trevor: The Musical is about 13-year-old Trevor, a force of nature with a vivid imagination. As he deals with becoming a teenager, Trevor struggles to navigate his own identity and determine how he fits in a challenging world.

The Trevor Project, which was created as a result of the Trevor film, is the nation’s only accredited crisis intervention and suicide prevention organization focused on saving LGBTQ lives. www.TheTrevorProject.org

Winner of the Jeff Award for Best New Work, the World Premiere of Trevor: The Musical was presented by Writers Theatre in a special agreement with A.B. & W. Productions through the Literary Development Initiative, with the generous support of David and Mary Winton Green, Glencoe, IL; Michael Halberstam, Artistic Director; Kathryn M. Lipuma, Executive Director.

Casting, ticket information and additional details for Trevor: The Musical will be announced soon.