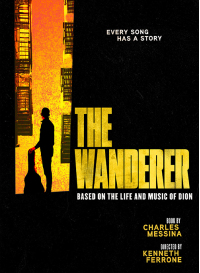 The Wanderer, a new musical based on the life of Rock n’ Roll Hall-of-Famer Dion DiMucci, the multi-platinum selling American music pioneer, will open at New Jersey’s Paper Mill Playhouse in the Spring of 2020 prior to a Broadway run.

The Wanderer is written by Charles Messina (A Room of My Own) and directed by Kenneth Ferrone (Cruel Intentions National Tour, “Rent on Fox”). Casting, additional creative team and a Broadway timeline will be announced at a later date.

Dion. One name set the standard of cool for a generation. But how does a kid from The Bronx make it to the Rock n’ Roll Hall of Fame?  In The Wanderer, the incredible musical journey of a troubled young man turned teenage heartthrob (and, ultimately, Rock n’ Roll icon) is told in intimate and no-holds-barred detail.  Dion’s music helped define a generation of Rock n’ Rollers.  His lifelong battle with addiction shed a stark light on the darker side of fame and success. This musical takes both subjects head on, set to the iconic sound of an incomparable era in American music, and celebrates the triumph of the human spirit against all odds.  The Wanderer  is the riveting true story of Dion, New York’s rebel king, the man Bruce Springsteen calls “the link between Frank Sinatra and Rock n’ Roll.”