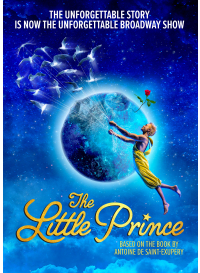 Following sold-out runs in Paris, Sydney, and Dubai, The Little Prince, one of the best-selling and most translated books ever published, is now in performances and will open Monday, April 11 at the Broadway Theatre (1681 Broadway at 53rd Street).

Following sold-out runs in Paris, Sydney, and Dubai, The Little Prince, one of the best-selling and most translated books ever published, will come home to New York in a new stage production filled with theatrical spectacle, dance, aerial acrobatics, and ground-breaking video mapping technology that bring the classic adventure story loved by generations to life.

Arriving in New York City on the cusp of World War II, the exiled French author and aviator Antoine de Saint-Exupéry wrote and illustrated The Little Prince in 1942 while residing between a Manhattan townhouse and the historic Delamater-Bevin Mansion on the north shore of Long Island. The now-classic was first published in the United States in 1943.

Generations around the world love The Little Prince. The international book phenomenon has sold a stunning 200 million copies, becoming the second most translated book in modern history in 250 languages. Now The Little Prince comes to life in a magical first-class theatre spectacular live on stage. Experience a constellation of compelling characters and colorful costumes. Leap into a vivid universe of dance, music, projections, and acrobatics. Immerse yourself in a uniquely innovative international stage production that will capture your heart and challenge your imagination.

Produced by Broadway Entertainment Group, The Little Prince is presented on Broadway by Special Arrangement with Rick Cummins and the Estate of John Scoullar.