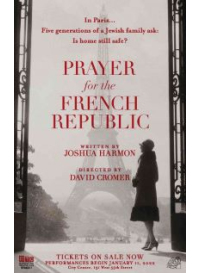 Prayer For The French Republic

Prayer for the French Republic is sponsored by The Blanche and Irving Laurie Foundation's Theatre Visions Fund program. Special thanks to The Harold and Mimi Steinberg Charitable Trust for supporting Manhattan Theatre Club. Prayer for the French Republic is a recipient of an Edgerton Foundation New Play Award and was commissioned by MTC through the Bank of America New Play Program.

In 1944, a Jewish couple in Paris desperately await news of their missing family. More than 70 years later, the couple’s great-grandchildren find themselves facing the same question as their ancestors: "Are we safe?" Following five generations of a French Jewish family, Prayer For The French Republic is a sweeping look at history, home, and the effects of an ancient hatred. This powerful world premiere comes from acclaimed playwright Joshua Harmon (Bad Jews, Significant Other) and director David Cromer, a Tony Award winner for The Band's Visit.

Casting and creative team information will be announced at a later date.