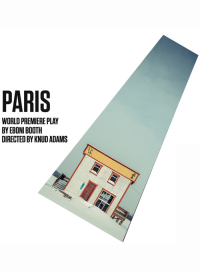 Emmie is one of the only black people living in Paris, Vermont, and she desperately needs a job. When she is hired at Berry's, a store off the interstate selling everything from baby carrots to lawnmowers, she begins to understand a new kind of isolation. A play about invisibility, being underpaid, and how it feels to work on your feet for ten hours a day. Paris is the off-Broadway playwriting debut of acclaimed actor Eboni Booth, directed by Knud Adams.

Paris is a recipient of the Edgerton Foundation New Play Award.