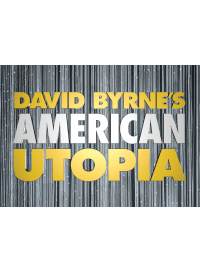 We could all use a little Utopia right now, and David Byrne’s American Utopia returns to rock Broadway this fall. This “dazzling, jubilant and rapturous” production – featuring “astonishing” staging by choreographer Annie-B Parson, with Alex Timbers serving as production consultant – will begin performances on September 17, 2021, featuring all the great songs, all the acclaimed musicians, and a gorgeous new venue to blow the roof off of. This is the event that will tell the world, if you want to rediscover the joy of live music, community and connection, Broadway’s St. James Theatre must be the place!

Academy Award®-winning director Spike Lee’s acclaimed filmed version of David Byrne’s American Utopia made its world premiere opening the 2020 Toronto International Film Festival and is currently streaming on HBO Max. The film has been called “a life-affirming, euphoria-producing, soul-energizing sing-along protest film that’s asking us to rise up against our own complacency” (IndieWire) and “an all-time-great concert film” (Vanity Fair). The A.V. Club said, “David Byrne and Spike Lee found the spectacle in the performers simply performing.”