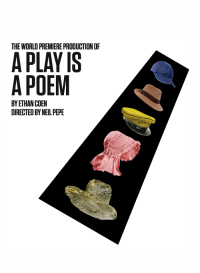 A Play is a Poem

A Play is a Poem will begin previews on Wednesday, May 20 and will open Monday, June 1st for a limited engagement through Sunday, June 21st, 2020 Off-Broadway at Atlantic Stage 2 (330 West 16th Street).

If the audience laughs, it’s a comedy. If they nod with new understanding, it’s a drama. If they laugh and nod but can’t say why it’s funny or what they’ve understood, it might be A Play Is A Poem, the new collection of one-acts. The hillbilly hollows of Appalachia, the executive suites of Hollywood, a New York tenement apartment, a magnolia-scented gazebo in Natchez, Mississippi—an eccentric look at life across America.